wiki:Old/WiMAX/bOperations
close Warning: Can't synchronize with repository "(default)" (/common/SVN/wimax does not appear to be a Subversion repository.). Look in the Trac log for more information.

1) Each GENI WiMAX site must operate in accordance with their FCC Experimental License and/or agreement with Clearwire, to avoid interference with others (particularly Clearwire) operating in the BRS/EBS spectrum.

2) Each GENI WiMAX site must cooperate with others (particularly Clearwire) if interference is suspected, to resolve the issue. This may involve temporarily going off-the-air, to see if they are or are not the source of the observed interference.

3) Each GENI WiMAX site must verify and maintain the accuracy of the information in the tables listed below, and follow the operations procedures listed below. It is essential that each site have a responsive local "Ops" contact, as listed in the table below.

4) Each GENI WiMAX site must install the site monitoring software, included in the latest WiMAX RF AggMgr, so that they are automatically forwarding operating paramaters to the OML Server at Rutgers WINLAB, who will then use the data to populate the ​GENI WiMAX Monitoring site.

5) Each GENI WiMAX site is expected to make their resources available to GENI experimenters.

(to be filled in)

Each GENI WiMAX site forwrds operating paramaters to an OML Server at Rutgers WINLAB, which uses the data to populate the:

Several GENI WiMAX sites support interfaces that allow an Experimenter to login, reserve resources, and then conduct experiments utilizing resources available at that site. See the following table for details.

This login approach follows the method supported by the ORBIT testbed, although the exact login process varies as noted.

Several GENI WiMAX sites have connections to the GENI backbone provided by Internet2, as summarized in the following table.

ION circuits provided by Internet2 are used to carry VLANs from the site to a routing server at Rutgers WINLAB, as summarized in the following table.

This arrangement provides a private IP network between all of the connected sites, as summarized in the following figure. 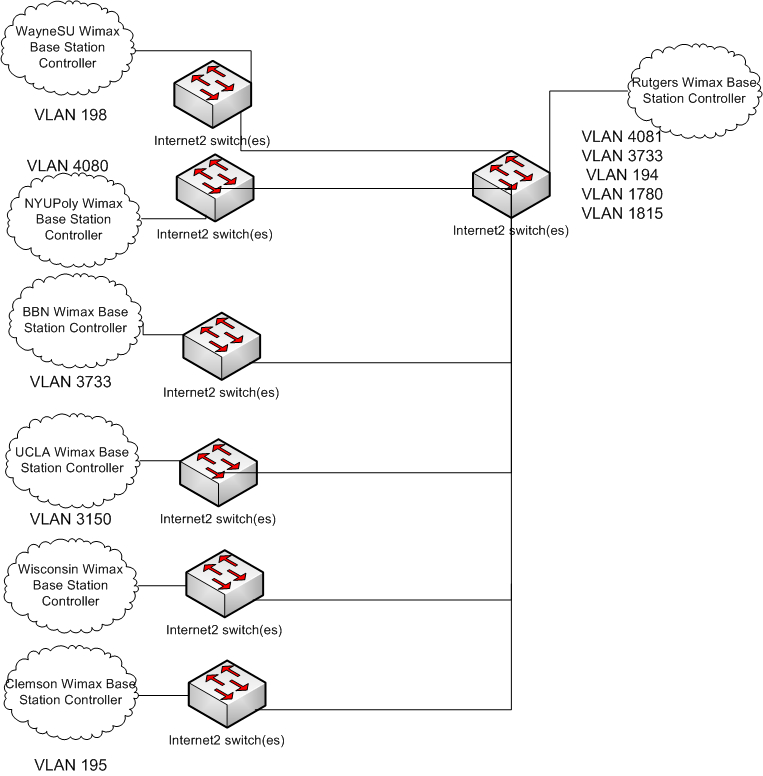 Private IP addresses are assigned at each site, as summarized in the following table.

This allows the connected sites to participate in multi-site experiments.

A site will receive a console machine, which runs all the OMF aggregate manager services and three client resources. Two of these client resources will have a fixed power supply. The third client will have a 12 V power supply so that it can function as a mobile node. All services on the console machine will be configured to use the geni.net sub-domain and all IP addresses will be initially configured in the following scheme.

Each site is asked to provide an Ubuntu 12.04 Host to run the Wimax-rf software. This requirement is based on the fact that most deployments are in remote locations or higher elevation locations so keeping the base station software closer to the base station is the motivation. This host will have 2 interfaces

Setup networking as follows on the console host

One unmanaged switch per subnet 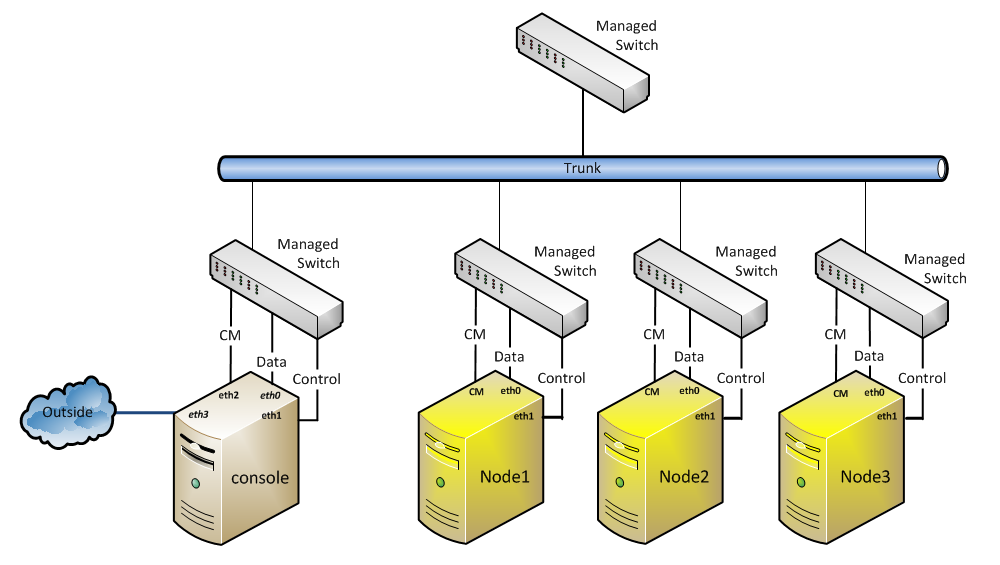 The console is called console.geni.net. You can ssh into it with the following credentials.

Once you have the testbed set up as explained above, use the following commands to talk to the nodes or troubleshoot.

The manual page is shown below.

The manual page is shown below.